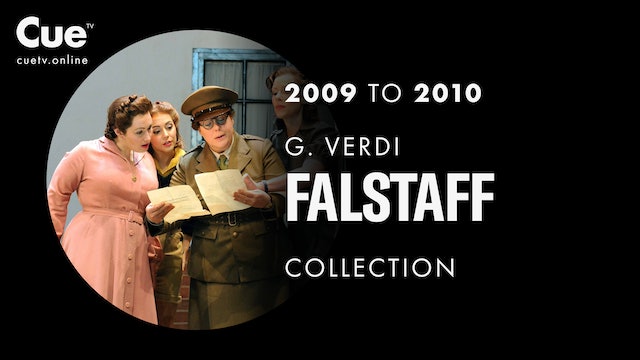 Falstaff (Italian pronunciation: [ˈfalstaf]) is a comic opera in three acts by the Italian composer Giuseppe Verdi. The Italian-language libretto was adapted by Arrigo Boito from the play The Merry Wives of Windsor and scenes from Henry IV, Part 1 and Part 2, by William Shakespeare. The work premiered on 9 February 1893 at La Scala, Milan.

Verdi wrote Falstaff, the last of his 28 operas, as he approached the age of 80. It was his second comedy, and his third work based on a Shakespeare play, following Macbeth and Otello. The plot revolves around the thwarted, sometimes farcical, efforts of the fat knight Sir John Falstaff to seduce two married women to gain access to their husbands' wealth.

Verdi was concerned about working on a new opera at his advanced age, but he yearned to write a comic work and was pleased with Boito's draft libretto. It took the collaborators three years from mid-1889 to complete. Although the prospect of a new opera from Verdi aroused immense interest in Italy and around the world, Falstaff did not prove to be as popular as earlier works in the composer's canon. After the initial performances in Italy, other European countries and the US, the work was neglected until the conductor Arturo Toscanini insisted on its revival at La Scala and the Metropolitan Opera in New York from the late 1890s into the next century. Some felt that the piece suffered from a lack of the full-blooded melodies of the best of Verdi's previous operas, a view strongly contradicted by Toscanini. Conductors of the generation after Toscanini to champion the work included Herbert von Karajan, Georg Solti and Leonard Bernstein. The work is now part of the regular operatic repertory.

Verdi made numerous changes to the music after the first performance, and editors have found difficulty in agreeing on a definitive score. The work was first recorded in 1932 and has subsequently received many studio and live recordings. Singers closely associated with the title role have included Victor Maurel (the first Falstaff), Mariano Stabile, Giuseppe Valdengo, Tito Gobbi, Geraint Evans, Bryn Terfel and Ambrogio Maestri.